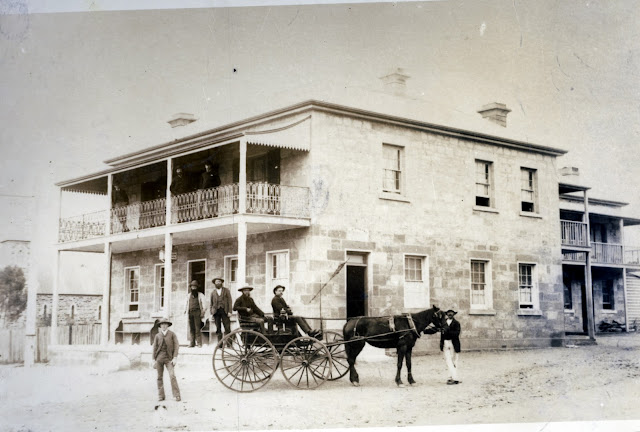 Here we see the Globe Hotel, note the lacework balconies, the lamp on the veranda post and the church pew seats under the window. On the upper balconies we see three men, one of whom was the local dentist who practiced in one of the rooms in the hotel.
We’re not sure when the Globe was originally built but it was first used as a house. It was turned into a hotel in 1880 by George Holland and extensive additions and alterations were completed in 1883 to turn the house into the Globe Hotel.
Ref: Transcript of the presentation by a Kandos High year 9 history student in 1976.
The front of the Globe Hotel is different now. The front is on the other side of the building.The side door is the same with an entrance built around it. The back part has had a change also with a staircase built from the corner in view.
When Louee Street was raised the pub lost it's verandah hence having to change the front.
The upstairs verandah has also disappeared.
Ref: Shirley Tunnicliff